Between divergences and adjustments of expectations 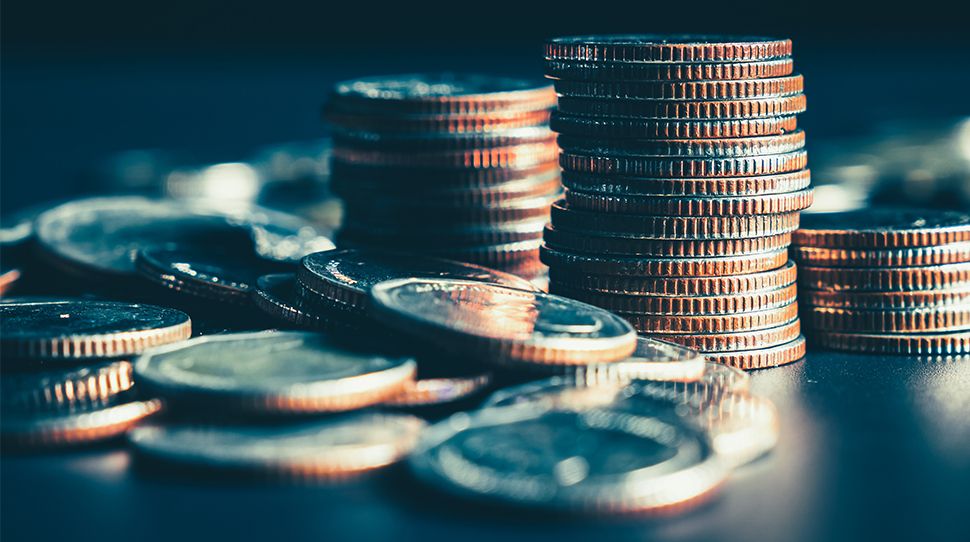 This week has been crucial in the markets' assessment of the inflation scenario and the way forward for central banks, in an already uncertain environment on economic growth prospects.

Last Friday, the US inflation surprised again on the upside and defies economists' and central bankers' forecasts by continuing to spread to more components, with core inflation now at 6% and headline inflation at 8.6% year-over-year. More worrisome, monthly inflation is now at 1%, meaning 12% annualised, and core inflation is up 0.6% or 7.2% annualised. Over the month, all components are now rising at an annualised rate of more than 10%: food (+1.2% month-on-month), energy (+3.9%), new and used vehicles (respectively +1% and +1.8%), and transportation (+1.3%), while medical care services (+0.4%) and shelter (+0.6%) are also rising rapidly.

In the Euro Area, inflation reached 8.1% year-on-year in May, with a diffusion of it to all components (see Macro Pulse published on 2 June).

This reinforces the urgency for central banks to act and probably accelerates the pace of normalisation for the Fed and the European Central Bank (ECB), whose monetary policy remains fundamentally behind the curve compared to the dynamic of inflation. As Olivier Blanchard said at the Amundi Investment Forum on 10 June 2022, "when you look inflation in the eye, it is already too late".

On the European side, the ECB has pre-announced a first 25 bps hike in July and is paving the way for a larger hike as early as September, while signalling a pace of future hikes that will depend on the inflation outlook. This is a strong signal, probably more hawkish than the market had expected. Indeed, the weakness of growth in the Euro Area and the risks of financial fragmentation (higher sovereign spreads on peripheral debt) seemed to limit the ECB's room for manoeuvre: this maintains our scenario of strong monetary divergences between central banks.

However, some leading economists, such as Olivier Blanchard, consider that central banks are determined to fight inflation. This should in theory lead them to raise real rates into positive territory, especially if they wish to bring inflation back down to their target, and even if it means giving themselves more ability to control the risk of peripheral debt yields rising too high by using the ECB's balance sheet.

Chart 1: Evolution of nominal and real rates in the United States and Euro Area (%) 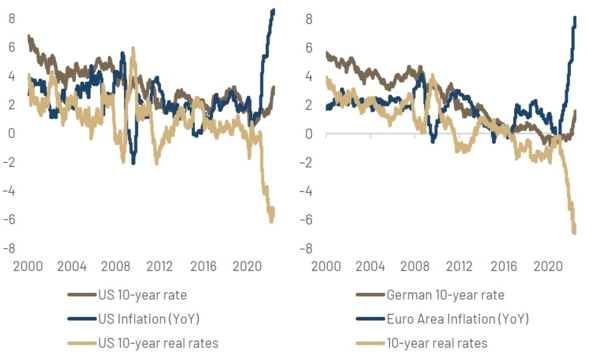 This is the key of the debate surrounding future central bank policy: beyond their change in posture and the rate hikes scheduled for 2022, will they follow through on their announced priority of fighting inflation (raising rates as long as inflation is above target)? Or will they stop short in the face of rising recessionary probability (which itself reduces inflationary pressures) and the spill over risk to the financial and sovereign spheres?

The consequences on the equity markets

If central banks were to raise real rates to positive territory by 2023, based on current core inflation forecasts, this could mean Fed rates above 3.5%, and long rates, which should keep rising, unless the yield curve inverts due to a recessionary environment, should keep rising. Equity markets are clearly not prepared for this, which probably explains the return of equity volatility. Our analysis shows that the S&P 500 generally corrects by 3 P/E points for a 100 bps rise in long-term rates (almost double for the Nasdaq). Add to this the fact that such a monetary policy would have stronger recessionary effects, which would lead to a downward revision of profits.

Chart 2: Sensitivity of the S&P 500 price/earnings ratio to long-term rates 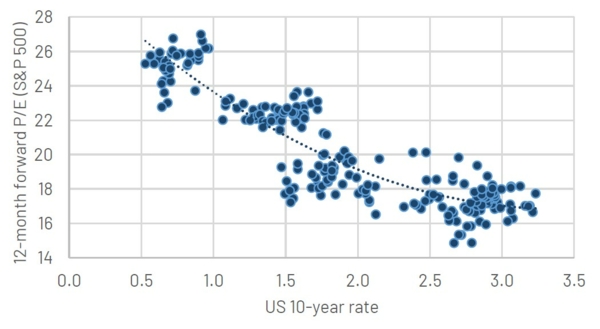 Therefore, we maintain our view that central banks could end their rate hikes cycle in early 2023 and accept inflation above 2% to avoid sending economies into recession and, in the case of the euro area, causing peripheral spreads to widen too much. But the upward movement in long-term rates has probably not yet come to an end.

There is therefore a significant probability that the trend of valuation reset will continue i) if the outlook for economic growth and margins are revised downwards ii) if the rise in long-term interest rates were to continue beyond the consensus view (a temporary peak at 3.5% for the US 10-Year rate). A more favourable alternative scenario would be based on lower inflationary pressures and resilient earnings levels. Some may also add that the reset of valuation on the Nasdaq is already strong (we are back to the spring 2020 P/E levels). This is not impossible, but the sequence of events of the last few months shows that a less favourable earnings scenario should be kept in mind: it seems difficult to conceive that the corporate sector can sustainably resist the slowdown in growth and the loss of purchasing power from consumers, either in terms of revenues or in terms of margins, while refinancing conditions are becoming more strained. This may be the message conveyed by the proportion of negative guidance provided by companies during the Q1 earnings season.

The next few months may therefore lead to a convergence of the macro and micro spheres, after several months of 2022 where we are struck by the contrast between the resilience of corporate profits and the sharp decline in consumer confidence indicators, which are paying a heavy price in this stagflationary environment.

This makes the equation more complex for equity investors in terms of style choices, although providing opportunities.

An environment that nevertheless offers opportunities

While rising interest rates and the risk of an economic slowdown make cyclical stocks (consumer discretionary, construction, etc.) less attractive, this environment favours value sectors and high return to shareholders thematics. Some sectors are also proving to be more resilient: this is the case for so-called "reflationary" sectors (commodities, energy and banks in particular) and, more generally, for yielding sectors.

In this context, we continue to favour resilient assets in the face of the triple challenge of inflation, rising interest rates and stagnation risk. Among them, one can find some of the themes we have been pushing in recent months in our publications: stocks of companies with strong pricing power (highlighted in Q2 2021), the aforementioned reflationary value sectors (reinforced several times since Q1 2021), which can be balanced with defensive sectors at reasonable valuations such as healthcare (highlighted last March). The utilities sector, the infrastructure segment and telecommunications also fit into this approach. Such a combination allows to produce portfolios with returns higher than the inflation currently expected for the next five years. 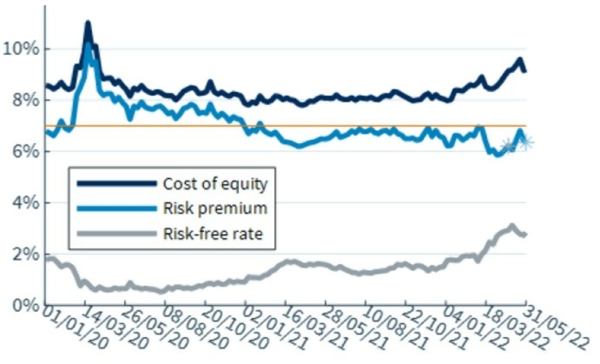 The good news in this environment, which is very different from the last decade, remains the return of yield for fixed income investors. If the latter to protect themselves against a further rise in long-term rates (which have already risen sharply), they can focus on corporate bonds, which are once again offering attractive yields (around 4.6% on US corporate bonds, US Corporate Index as of 10 June). This increase in interest rates, combined with the rise in volatility, is also a favourable context for the construction of structured products to improve portfolio skewness.

In conclusion, it must be said that visibility remains low in an environment that has changed so much in the space of a few months, and that investors are still having trouble getting used to. Indeed, as Pascal Blanqué wrote, "every expectation is formed on the basis of what has happened" ("Money, Memory and the interest rate", in Essays in Positive Investment Management). The memory effects of the recent past and the uncertainty caused by this change in context explain the high volatility of inflation and interest rate expectations in recent months. In the coming months, it may be earnings expectations that will suffer from increased volatility.
This explains our cautious allocation posture, which seeks to take advantage of the opportunities offered by this volatile market while maintaining moderate exposure to equities and an underweight in duration. 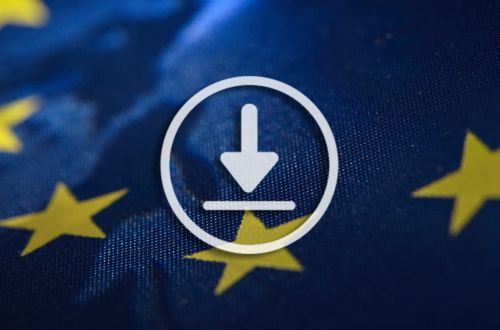 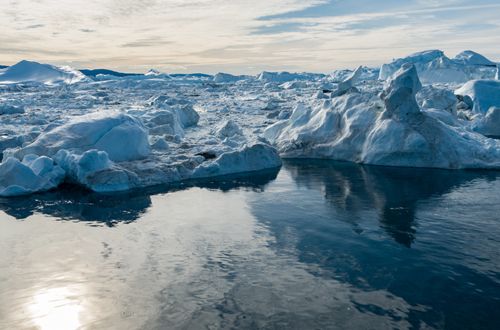 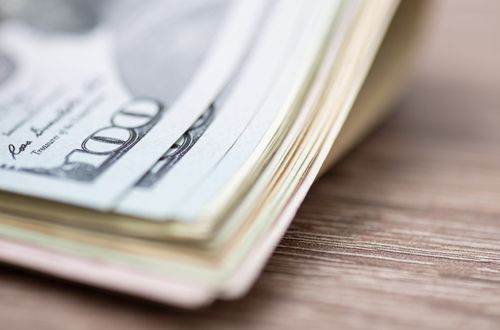